The History of REMS

The creation of new drug safety protections, called Risk Evaluation and Mitigation Strategies (REMS), marked a significant moment for patient safety. To understand how REMS safeguards are making a difference to patients, health providers and the health care system, below is a brief history of REMS and how this program has evolved over time.

The Call to Action and Congress’ Response

After several widely prescribed medications were removed from the market in the early 2000s due to safety concerns, pressure to make fundamental changes to the nation’s drug safety system began to escalate. The problem was that even though the Food and Drug Administration (FDA) could require drug manufacturers to mitigate the risks of their medicines, the agency lacked the power to require rigorous safety measures if a safety concern was raised after the drug was approved.

The limitations of FDA’s authority became national news in 2004 when the popular pain medicine, rofecoxib (Vioxx), was pulled from the market after scientific reports linked the drug to more than 60,000 heart attack and stroke-related deaths between 1999 and 2004.  It became apparent that while FDA could require post-approval studies, surveillance programs and other “post-marketing commitments” from manufacturers before the drug was approved, the agency needed to be able to take enforceable action if a safety concern presented itself after the product was already in the market.

To address these limitations, Congress passed the Food and Drug Administration Amendments Act (FDAAA) of 2007. This landmark legislation gave FDA broad powers to regulate drug safety, including authority to require and enforce Risk Evaluation and Mitigation Strategies (REMS) programs to ensure that the benefits of a drug outweighs it’s risks.

Although REMS, by their nature, restrict access to medicines with known serious risks, Congress specifically declared that REMS should not unduly burden or prevent patient access, particularly in the case of life-threatening diseases or conditions. Accordingly, the law outlined the factors FDA should consider when deciding to require REMS, including the size of the patient population, the benefit of the drug, the length of treatment, the seriousness of adverse events, and whether the drug is a new treatment.

Moving to a Streamlined REMS Program with a More Concentrated Focus 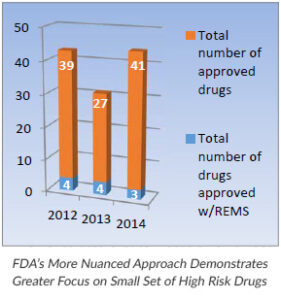 At the same time, FDA’s decision about when to require REMS has changed with experience. In 2011, FDA put in place a new initiative called the “REMS Integration Initiative” to streamline the use of REMS programs in order to focus on the most potentially dangerous drugs.  As a result, FDA has released over 200 REMS since 2009.

At a time when medicines are becoming more targeted and complex, ensuring patients’ safe use of medications with known dangerous risks is critical for public health and safety. Therefore, REMS programs will continue to be an important tool to advance patient safety, protect public health, and provide access to innovative medicines.