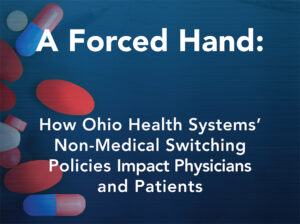 According to a new report jointly published by Aimed Alliance and the Doctor-Patient Rights Project (DPRP), Ohio hospitals and health systems are forcing stable patients to use different treatments than those originally prescribed by their doctor. The report, titled A Forced Hand: How Ohio Health Systems’ Non-Medical Switching Policies Impact Physicians and Patients, found that non-medical switching occurs in hospitals when administrators remove medications from the hospitals’ formulary, stop stocking medications in the hospital pharmacy, and then instruct physicians to switch their patients’ medications.

This original report features survey data collected from over Ohio 200 physicians and provides insights into how these nonmedical switching practices impact both patients and providers. Key findings include:

The report also highlighted the lack of transparency of hospitals’ appeals processes and the need for legislative reform to improve such transparency. Review A Forced Hand to learn more about this issue and how it is impacting patients in Ohio.